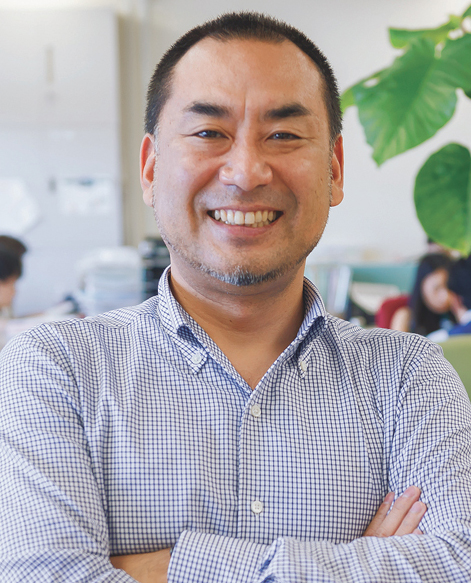 Graduated from The University of Tokyo, Graduate School of Agriculture and Life Sciences.

Throughout his time in university, Dr. Fujita was thinking how to create a society based on biotechnology that is necessary to humans. He swore to seek a way to implement biotechnology in society not as a scholar but as a businessman. While learning actual business management at the Strategy Consulting Department in Accenture Japan Ltd, he studied the concepts and perspectives of business management that is required in the future bio industry.

After that, starting with Chitose Laboratory Corp., he established numerous social problem solving biotechnology companies and grew them one by one.

He is looking for a better way to turn cutting-edge biotechnology into businesses and provide them to society, from the perspective of mankind a thousand years from now and what they think are businesses that the 21st century should be engaged in.

Firm Profile
We, CHITOSE GROUP is a family of biotechnology companies operating mainly in Southeast Asia and Japan with an aim of leaving mankind with an environment where they can live in abundance for over a thousand years. CHITOSE GROUP is creating new values in the fields of agriculture, medical, food, energy, chemistry and others through “Technological development capabilities in the biotechnology field by constantly promoting economic rationality” and “Business development capabilities for drawing a path towards commercialization by understanding the essence and limitations of biotechnology”.

Vision
To live in abundance beyond the next millennium using the ability of living things.

CHITOSE GROUP pursues the possibilities of biotechnology through technological development and business development to transform the current industrial structure of pharmaceuticals, foods, chemicals, agriculture, energy etc. which are based on fossil resources, into a structure based on photosynthesis to make a sustainable society.

Our aim is to create a society based on photosynthesis and biotechnology.

The current society is built based on fossil resources. It is impossible to completely change the society that is based on fossil resources into a society that is based on photosynthesis while we are alive. However, for ones living hundreds of years later, we can start to change to a society based on photosynthesis with the projects that are technically possible and also guaranteed economic rationality even at the present moment in the early 21st century.

We develop and accumulate technologies that draw out the potential of small organisms such as microorganisms, cell lines, algae, flora, etc.

In order to allow for the efficient production of organic matter through a sustainable way using the sun’s energy by photosynthesis and to produce various substances necessary for human society, it is necessary to use the ability of small living organisms such as microorganisms and animal cells. Building a project not solely based on the idea of “controlling the living thing”, which is the current trend, but on the idea that human beings have matured through spending long periods of time “continuously managing living things”. This will become the key to paving the way for the next era.

We will embed the technologies into the society one by one as a business with continuous profitability.

While we are alive, it would be impossible to make the whole structure of the society to be based on photosynthesis and biotechnology. However, if we embed the technology we created as a business in society, we are certain that someone will understand why we wanted to leave this technology to the next generation hundreds of years later, and will further improve it to fit in the economic situation of that time to use it for making a better earth and society.